Callao City Lights, the brand under which the outdoor screens of Madrid’s Cines Callao are marketed, launches Circuito Gran Vía, the largest large-format digital circuit in urban environments in Spain. 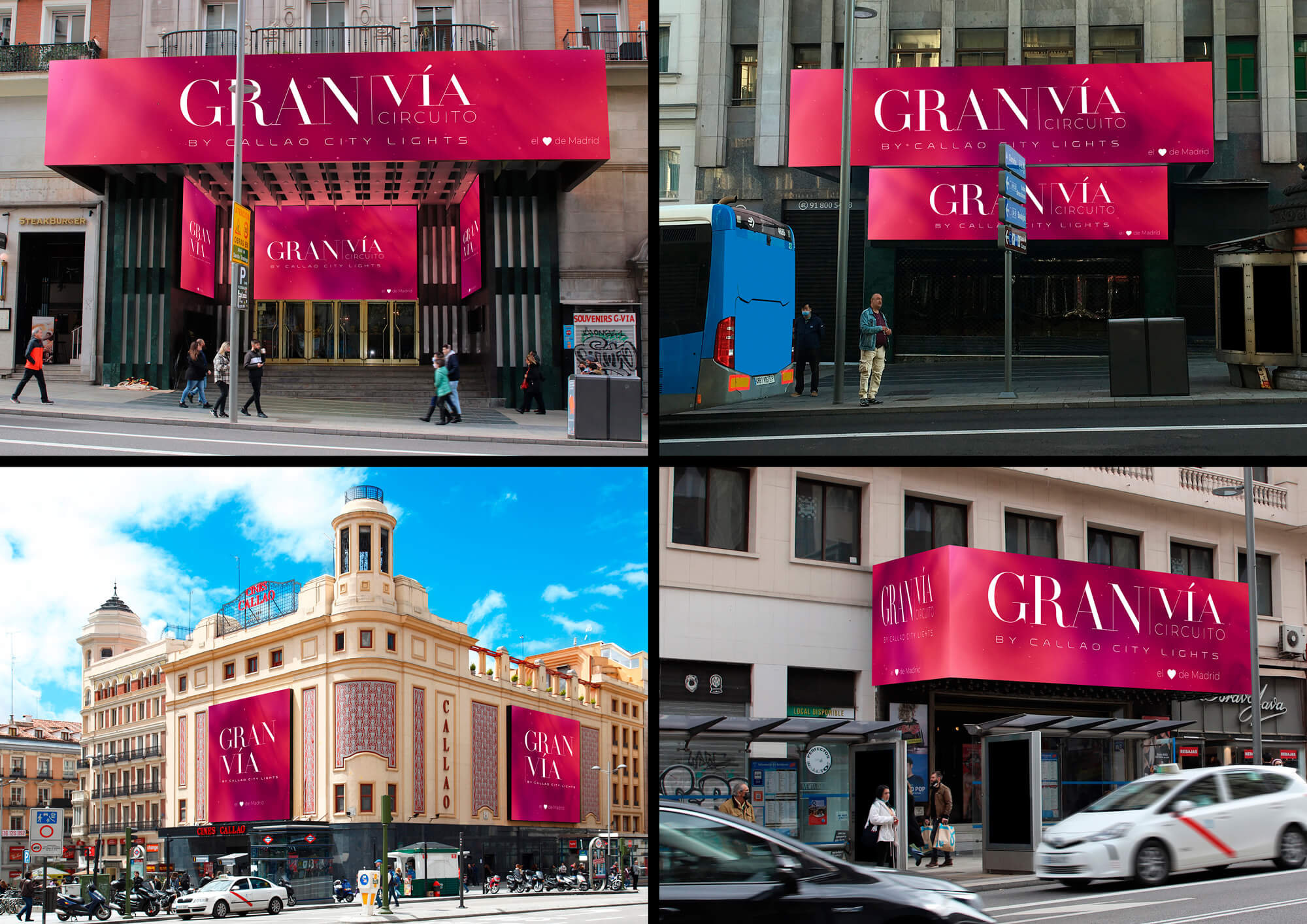 Circuito Gran Vía is the result of an agreement reached with Stage Entertainment, the company responsible for the Lope de Vega and Coliseum theatres, and with Recreaciones Inmersivas, responsible for the operation of the Rialto theater billboard, for the commercialisation of their respective digital screens which, in the case of the Rialto, have just been installed at the entrance, replacing the existing advertising posters.

In this way, Callao City Lights takes over the marketing of the digital advertising screens of 4 of the 7 cinemas/theatres that are currently still in operation on Madrid’s Gran Vía. This means going from managing 2 screens (those of the Callao Cinemas) to 15, with a total surface area of 460m2, providing the brands with new locations that will allow them to reach the public that usually travels along the Callao/Plaza de España axis, which is particularly popular due to its tourist, commercial and entertainment attractions.

The Rialto Theatre has just replaced the advertising signage, which until now was on its façade, with 3 high-resolution digital screens. The Coliseum and Lope de Vega theatres now have 4 and 6 digital screens on their exteriors, respectively. Specifically, the Coliseum has 3 on the façade and one presiding over the entrance. And the Lope de Vega, with 3 at the entrance and 3 on the exterior theater billboard.

Support for culture and outdoor references

This is a new commitment to the large cinemas and theatres that are still open on Madrid’s Gran Vía. Callao City Lights already took the first step in this direction with the placement of two large digital screens on the façades of the Callao Cinemas in 2011, replacing the old posters that until then advertised the films shown. Screens that were renovated for others of higher image quality in 2019 and to which new features have been added since then to improve their exploitation, such as 3D creativity, augmented reality, interactivity with social networks, mobile retargeting, live broadcasts, or synchronisation with other media in the square.

“We are very excited about this agreement that will allow us once again to show our support to the world of culture and entertainment, contributing in this case to the relevance of three of the most emblematic theatres in Madrid, as we have been doing for more than 10 years in the Callao Cinemas, and continue to be pioneers and trendsetters in outdoor advertising,” says Josué Reyzábal, CEO of Conjunto Empresarial RDE, the company that owns the Callao Cinemas. And he adds: “With this marketing, we want to help the theatres to last. We continue to be committed to innovation and, through our initiatives, to put the spotlight on Madrid’s Gran Vía”.

“Under the Gran Vía Circuit brand, we are going to market some of the most emblematic theatres in the capital, in the heart of the golden mile of Madrid’s outdoor advertising, between Primark and the biggest Zara in Europe. A move that will allow us to multiply the 5 million weekly impacts that the Callao City Lights screens currently register”, says Gorka Pagazaurtundua, commercial director of Callao City Lights.

2 screens, one in Plaza del Callao and the other in Gran Vía. The ones with the largest surface area in the whole area.

Built-in 1926 by Luis Gutiérrez Soto, the historic Cines Callao building is one of the best examples of art deco architecture in the capital. It was inaugurated as a cinema on 11 December of the same year, with the showing of the film ‘Luis Candelas, el bandido de Madrid’.

Its location is privileged, in one of the most commercial and leisure areas in the centre of Madrid, in the heart of the Plaza del Callao, the most visited square in Spain and the third busiest in Europe (150 million people a year), behind Piccadilly Circus (London) and the Louvre (Paris).

Always at the forefront of culture, Cines Callao has been the protagonist of great cinematographic milestones. It was the first cinema in Spain to show a sound and spoken film, ‘El Cantor de Jazz’, on 13th June 1929, and also the first film shot in Spanish in Hollywood, ‘El cuerpo del delito’, on 21st May 1930. Likewise, in 1935, the first colour film in Spain premiered in Cines Callao; and in 1953, the first 3D film.

Nowadays, in addition to offering cinema in its two cinemas, the building is the setting for major events and film premieres.

6 screens, three of which are located at the entrance to the theatre (one at the back and two on the sides), and the other three, bordering the exterior theater billboard.

Located at number 57 Gran Vía in Madrid, the Lope de Vega Theatre has now recovered its original name and since 1997 has been a reference point for musical theatre on Gran Vía. Since then, it has been the scene of great successes with musicals such as ‘Beauty and the Beast’, ‘The Phantom of the Opera’, ‘Mamma Mia’, ‘Jesus Christ Superstar’ or ‘Les Miserables’, all of them Stage Entertainment productions. In 2011 it underwent a thorough refurbishment, respecting its rich history, to host the Spanish premiere of the musical ‘The Lion King’, which to this day continues to triumph on its stage. Since 2017, the theatre has been managed by the Stage Entertainment production company.

4 screens, three in the theater billboard of the façade and one presiding over the entrance.

It was conceived in 1931 to be a place where all kinds of shows could be held, however, it was finally opened as a cinema in 1932. Located at Gran Vía, 78, during the Civil War, it was used as a military warehouse, but immediately afterwards it returned to its origins to once again programme first-run films.

In the 1990s it became the property of Bautista Soler, who decided to recover the space as a theatre, but it was not until 2000 that it underwent a refurbishment and became one of the leading theatres for the musical genre. The Coliseum Theatre is considered an ‘asset of cultural interest’ and enjoys special protection.

In 2014, the theatre closed its doors until March 2017, when the curtain went up again, completely renovated, after Stage Entertainment took over its management a few months earlier.

Great titles such as ‘My Fair Lady’, ‘Cats’, ‘The Producers’, ‘Beauty and the Beast’, ‘Chicago’, ‘Mamma Mia’, ‘The Bodyguard’, and ‘Anastasia’ have made thousands of spectators vibrate in their seats. In 2021, the theatre premiered ‘Tina’, the Tina Turner musical.

The Rialto Theatre is located at number 54 Gran Vía in Madrid. It was built between 1926 and 1930, by the architects José de Aragón and José María Mendoza Ussía, and founded by Antonio Ramos Espejo in 1930 as the Cines Rialto (between 1932 and 1934 it was called Cine Astoria).

Its first premiere was ‘Variedades de la Paramount’. Subsequently, it was the setting for the premiere of ‘El último Cuplé’, a film starring Sara Montiel, which broke all records for screen time and box office takings at the time. In addition, this cinema offered American musical comedies, anticipating its destiny as a theatrical venue for great works of musical theatre. In fact, after being converted into a theatre, its first show was the premiere of ‘Hoy no me puedo levantar’, the most successful Spanish musical in history.

Since then, the Rialto Theatre has hosted other great shows such as ‘Enamorados Anónimos’, ’40 El Musical’, ‘Cabaret’ and, recently, two seasons of ‘Nada es imposible’, with Antonio Díaz ‘El Mago Pop’. It has also been the stage for plays such as ‘Sé infiel y no mires con quién’, ‘Buena gente’ and ‘La función que sale mal’. It is also a reference venue for concerts. In the 2021 – 22 season, the Teatro Rialto hosted ‘Sombras’ by Sara Baras, ‘Full Monty El Musical’, ‘Antoine’ and, from February 2022, ‘Los Morancos’, among other shows. In September it will premiere ‘Mamma Mia!’, one of the most awarded and internationally acclaimed musicals.