CSR ACTIONS ON OUR SCREENS

Callao City Lights has selflessly joined the promotion of the documentary ‘La quimio jugando se pasa volando’, the new initiative of the Juegaterapia Foundation in support of children with cancer, giving its digital screens, located outside the Madrid Callao Cinemas, to broadcast the campaign announcing the premiere of this film. The Juegaterapia Foundation aims with this documentary to raise awareness in society of the benefits that the use of video games has for children with cancer. 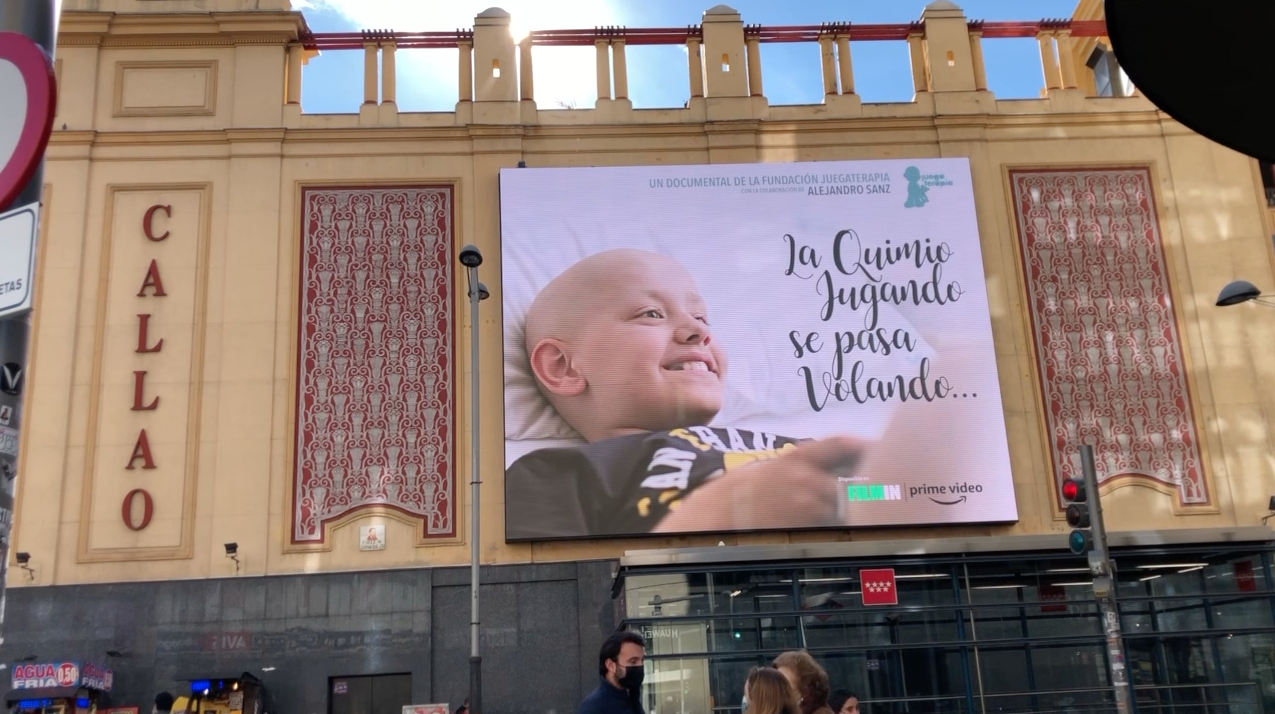 “We are delighted to be able to collaborate in this type of initiatives, even more so when they are carried out for the benefit of children with cancer. We are sure that the promotion of this documentary on our screens, located in the Plaza del Callao, the busiest square in Spain, will help many more people to know the extraordinary work done by the Juegaterapia Foundation,” said Josué Reyzabal, CEO of Callao City Lights.

In ‘La quimio jugando se pasa volando’, several children and their families explain what cancer meant to them and how video games helped them to overcome it. Narrated with the collaboration of singer and composer Alejandro Sanz, the documentary reveals the results of a scientific study carried out at the Hospital de la Paz in Madrid and recently published in the Journal of Medical Internet Research, according to which playing video games during chemotherapy treatment makes children feel less pain and favors the healing process. Specifically, the research concludes that this practice reduces by 20% the administration of morphine in children hospitalized with cancer and causes a 14% increase in parasympathetic tone, which is largely responsible for the body’s recovery, favoring healing.

This study has been possible thanks to the disinterested donation by PlayStation (Sony Interactive Entertainment Spain) of the consoles, video games and other resources necessary for its realization.

The following companies have also collaborated in solidarity: the production company 925 Sintagma, the director Marcos Calle, the musician Alejandro Pelayo, the artist Alejandro Sanz and Fuerza del Corazón, the companies Prhoinsa and Dräger Medical Hispania and the translator Cristina Berry. The media management of the advertising campaign has been carried out by Mediacom, which has also participated in a disinterested way.

With this campaign and documentary, the Juegateparia Foundation aims to call for the donation of consoles (at a time like the present, after Christmas, when many will be replaced by new ones in homes), as well as to invite hospital medical departments to include video games in the protocols of health therapies.

‘La quimio jugando se pasa volando’ can be seen on the Filmin and Amazon Prime Video platforms. The campaign began to be broadcasted on the screens of Callao City Lights on January 26th and will continue for a week.